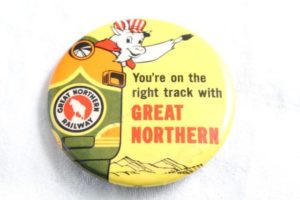 This story originally appeared in the Saint Paul Almanac, 2013-2014 Edition

Driving through the intersection of Dale St. and Minnehaha Ave, in the Frogtown district, you couldn’t help being impressed by the massive yellow-ochre brick building with the exceptionally tall glass block windows. The three story monolith housed the diesel locomotive repair and overhaul facilities for the Great Northern Railway. The ‘shops’ as they were known, were built by James J. Hill at the turn of the 20th century. Because of his admiration for the work ethic of the Bohemian and German immigrants of Frogtown, he built the shops in their neighborhood in order to have a dependable work force to drawn on. It seems like almost everyone in my family, and my friends’ families, worked or had worked for the railroad at some point in their life. I was no exception; after returning from a tour of duty in Vietnam, I was offered a job in the materials department and joined the union of the Brotherhood of Railway and Airline Clerks.

Locomotive engines are propelled by microbus-sized diesel engines that spin the generators that power the traction motors that in turn, move the wheels. To overhaul and maintain these beasts required a corps of mechanics, steelworkers, pipe-fitters and electricians, along with a warehouse full of parts. My first day on the job, I felt as if I had been transported to a medieval blacksmith shop. Lined up before me were three tracks of locomotives with their guts spilled out on the floor alongside them. The dark air was perfumed with petroleum distillates; the light from the tall, glass block windows was dim, punctuated by brilliant blue welders’ torches and showers of sparks cascading off over-sized grinding wheels. All rays of light were lost in the concrete floor which was saturated black with decades of oil and solvents.

Above the dull roar of the machinery, the ring of hammer on anvil ricocheted off the pale green walls that were coated with a film of oily grit, obscuring the red stenciled safety slogans above the power tools. Time of day was marked by the steam whistle atop the building. Start time, break time, lunch time, break time, and finally at 3:20 pm the crew shed their masks, goggles and safety hats to assemble near the open door. Before the final whistle ended, we were gone.

Many of the guys headed over to the Bourbon Bar, kitty corner on Dale St where they cashed their paychecks and washed the diesel dust from their throats with bottles of Schmidt beer, openly uneasy about their futures. Rocky, the Great Northern Goat had morphed into the generic corporate logo of Burlington Northern, Inc.; the old timers with insider information warned of a bad train coming down the tracks. I moved on to Colorado before it hit, but family members kept me in the loop as the age of corporate consolidation progressed.

A sprawling, state of the art locomotive maintenance facility was constructed, somewhere in Montana I heard, and in the late seventies the end came for the Dale Street Shops. In 1999, the wrecking ball punched through the bricks and glass; decades of history crumbled in a heap onto the carbonized cement floor. It took three years and approximately thirty million dollars to clean up the soil contaminated with 100 years of chemicals and petroleum products before it could be redeveloped into an office park. I often shop across the street at Dragon Star Market and glance at the turquoise sign that reads Great Northern Business Center, but it must be a mirage, I still see the shops.